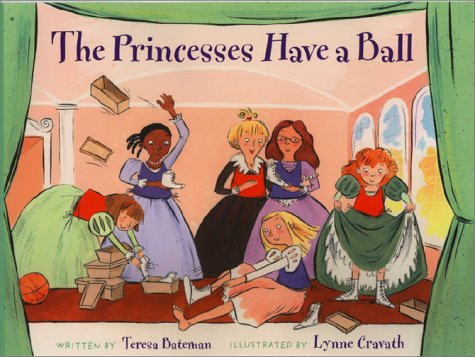 THE PRINCESSES HAVE A BALL

Bateman () gives this retelling of the 12 dancing princesses a shot of girl-power, despite a rather relentless rhyme scheme. The dozen royal daughters wear out their shoes every night—not because they've been ballroom dancing, but because they've been playing basketball. In Cravath's () ink-and-wash spreads, the king appears as a pudgy suburbanite in a polo shirt and an ermine cape. He protests that the girls should be "dreaming of a prince/ and your wedding day." The multicultural sisters—all dressed in lovely princess gowns, some in glasses, some with curly hair and some with dreadlocks—foil their father's spies. Jack the cobbler, though, gets to the bottom of it: he finds the females in the basement. "They made up two teams,/ with two substitutes,/ And they ran and passed/ and they shouted, 'SHOOT!' " To the girls' delight, Jack designs high-tops for them. When their father discovers their new talent, he concedes, "Even royalty is allowed some fun,/ and I'm proud of you,/ each and every one." Cravath's drawings feature shots from odd angles and cute visuals for the grown-ups (a 12-unit canopy bed, a banner towed by an airplane over the kingdom offering a "Big Reward" for solving the mystery). The 12 unnamed princesses tend to blur into a single character, despite Cravath's attempts to differentiate them in the artwork, and the driving beat tends to overwhelm the narrative. Ages 7-10.