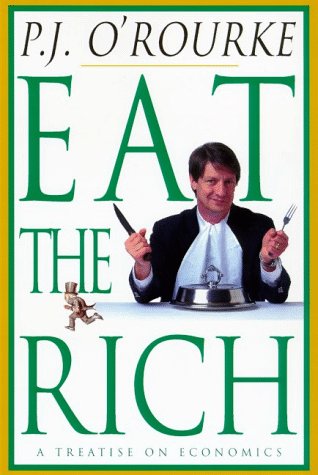 Eat the Rich: A Treatise on Economics

Having chewed up and spat out the politically correct (All the Troubles in the World) and the U.S. government (Parliament of Whores), O'Rourke takes a more global tack. Here, he combines something of Michael Palin's Pole to Pole, a soup on of Swift's A Modest Proposal and Keynsian garnish in an effort to find out why some places are ""prosperous and thriving while others just suck."" Stymied by the ""puerile and impenetrable"" prose of condescending college texts, O'Rourke set forth on a two-year worldwide tour of economic practice (or mal-). He begins amid the ""moil and tumult"" of Wall Street (""Good Capitalism"") before turning to dirt-poor Albania, where, in an example of ""Bad Capitalism,"" free market is the freedom to gamble stupidly. ""Good Socialism"" (Sweden) and ""Bad Socialism"" (Cuba) are followed by O'Rourke's always perverse but often perversely accurate take on Econ 101 (""microeconomics is about money you don't have, and macroeconomics is about money the government is out of""). Four subsequent chapters reportedly offer case studies of economic principles, except that Russia, Tanzania, Hong Kong and Shanghai all seem to prove that economic theory is just that. There's lots of trademark O'Rourke humor (""you can puke on the train,"" he says of a trip through Russia, ""you can cook tripe on alcohol stoves and make reeking picnics of smoked fish and goat cheese, but you can't smoke""). There's also the feeling that despite (or maybe because of) his lack of credentials, he's often right. O'Rourke proves that money can be funny without being counterfeit. 150,000 first printing; $150,000 ad/promo; 26-city author tour. (Sept.) FYI: Also available as a Random House audio, $18 ISBN 0-375-40482-1
close
Details