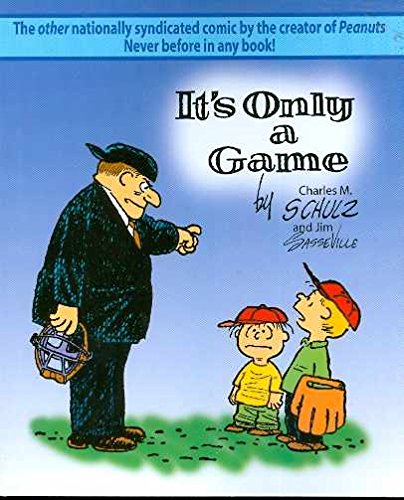 IT'S ONLY A GAME

Between 1957 and 1959, Schulz created a single-panel sports-themed feature that ran three times a week or in a combined package on Sunday. He relied increasingly on Sasseville, who was writing and drawing the comic book, to turn sketches and concepts into finished work. However, the fundamental style and attitude remains recognizably Schulz's. The same quality that made Peanuts a modern classic—Schulz's amused fascination with human pretensions and delusions—animates this minor newspaper cartoon. Unlike some contemporary sports cartoons, it focuses on amateur activities such as golf, bowling, Ping-Pong and even bridge. There's no cheering crowd, no huge prize to win. The people playing these games are at least nominally adults, though they look a lot like the Peanuts crew and behave like them, too. If Charlie Brown and his friends worry like adults, Schulz understood how childishly grownups can behave when they hit a bad shot or make a grand slam. Such excessive emotion is nothing to be concerned about, though; that's just the way we are. Schulz clearly enjoyed reminding adults of how silly they can be, as on the cover, where a Little League player reminds a scowling adult umpire that he shouldn't take a game too seriously. If nothing else, this book answers the question of what a grown-up Charlie Brown would have looked like.