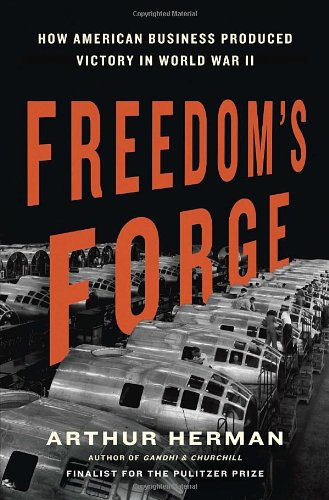 Herman (How the Scots Invented the Modern World) tells the epic story of the American businessmen who, in only a few years, helped America become the largest military power in history. These include William Knudsen, a Danish immigrant who turned General Motors into “the largest industrial corporation in the world,” and industrialist Henry Kaiser, the “master builder” responsible for infrastructure projects throughout the country. In 1940, Roosevelt personally called upon Knudsen to oversee the assignment of contracts worth billions of dollars to produce the guns, tanks, planes, and other equipment needed for battle. Eschewing centralization in favor of free-market incentives, Knudsen directed the forging of “‘the arsenal of democracy,’” as factories around the nation converted to wartime production. Kaiser, meanwhile, presided over the creation of a new navy, America’s “Liberty ships,” which Churchill called “the foundation of all our hopes.” At times, the book falls into not-so-subtle hagiography of American capitalists, who are portrayed as selfless patriots who succeed despite the efforts of opportunistic labor organizations and big government New Dealers hostile to the free market. However, Herman has a knack for generating both suspense and patriotic self-congratulation. A cross between Ayn Rand, Herman Wouk, and the Wall Street Journal, the book is a compulsively readable tribute to “the miracle of mass production.” Agent: Glen Hartley, Writers Representatives. (May)
close
Details