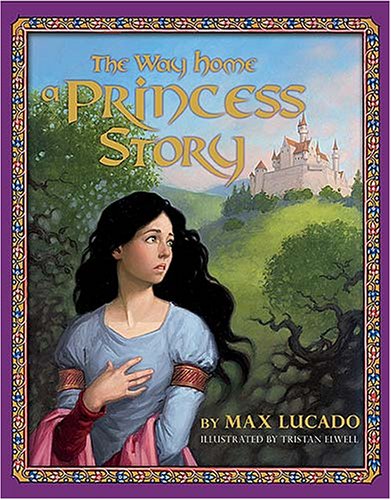 The Way Home: A Princess Story

A curious princess, a dutiful knight and a king willing to make the ultimate sacrifice for his daughter all play a key role in Lucado's original fairy tale about finding—and straying from—the right path. Life within the protective castle walls and gardens is all Princess Anna has ever known. But she's heard tales of the free and easy life enjoyed by the Lowlanders who play in the meadow, splash in the creek and live in the looming dark forest. Anna wants to know what it's like on the other side of the kingdom, so to speak. One day she gets her wish when disguised, evil Lowlanders Ima, Gunnah and Getcha, who are servants of wicked Olbaid, tempt Anna into exploring the forest where she is soon held captive. But the king will risk all to save her in a dramatic, but nonviolent, showdown with Olbaid. Though Lucado does not mention Scripture or God, his themes of temptation and sacrifice as well as his archetypes and symbolism are clear discussion starters for those in the Christian faith (and may be applied more broadly, too). Elwell's shadowy watercolors evoke an elegant, medieval era and his warty, troll-like Lowlanders are a memorable bunch. Ages 5-8