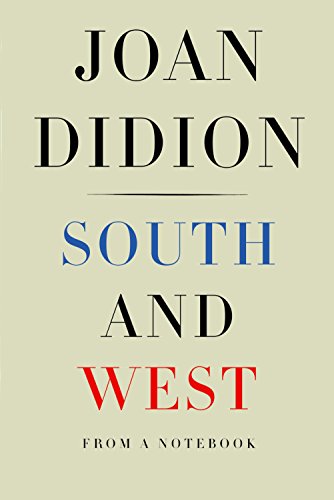 South and West: From A Notebook

Even in raw form, Didion’s (Blue Nights) voice surpasses other writers’ in “elegance and clarity,” Nathaniel Rich astutely observes in his introduction to Didion’s notebooks from her 1970 trip to Louisiana, Alabama, and Mississippi and much shorter 1976 musings about her California youth. Didion’s notes display her characteristic verbal power: details such as “bananas would rot, and harbor tarantulas” (about New Orleans weather) punctuate this short volume. Moreover, Didion reveals remarkable foresight about America’s political direction: Rich traces a direct line from her nearly 50-year-old musings on the Gulf Coast as America’s “psychic center” to the Trump election. But most strikingly, Didion’s observations reveal differences with today, such as a degree of civility now often missing from public discourse. In one dinner exchange, for example, a wealthy white Mississippian gripes about busing, yet says, “Basically I know the people who are pushing it are right.” Students of social history, fans of Didion, and those seeking a quick, engaging read will appreciate this work: the raw immediacy of unedited prose by a master has an urgency that more polished works often lack. Agent: Lynn Nesbit, Janklow & Nesbit. (Mar.)

This review has been corrected to reflect a slight change in the title.