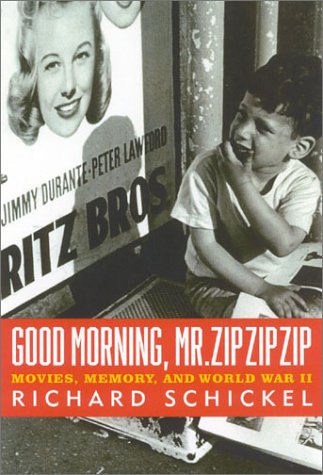 Schickel, a 20-year film critic for , analyzes his obsession with movies vis-à-vis his own life. He discovered the "seductive" allure of cinema at age five and was hooked. Schickel's is a touching memoir of a smalltown boy whose life was shaped by WWII and the myths shrouded in "the greatest generation," a notion he takes to task. His universe is Wauwatosa, Wis., where he leads a safe, middle-class existence, recalled in extraordinary detail. Clever at reading and hopeless at math—"doubtless the source of my profession is to be found here"—Schickel remains restless. He longs to escape this placid, Sinclair Lewis–style burb and finds release in films. Be it the adventures of Errol Flynn or Gary Cooper, he's transported. And therein lies the appeal of criticism: "its assertiveness, its ability to subvert the sometimes pompous, often expensive, object under review." This is the era of radio shows, blood drives and rationing. It's also a time when Hollywood and the War Office conspired, in Schickel's view, to present a distorted view of war. The Japanese were always brutal, while movie Germans often possessed civility, hiding hidden truths and creating political distortions that linger to this day. Most shameful, he says, films ignored the suffering of European Jews. Throughout his narrative, he pierces holes in American complacency: democracy prevailed onscreen; ethnic disdain and anti-Semitism raged offscreen. Schickel intercuts personal reminiscences with film synopses, subjecting both to his critical gaze.