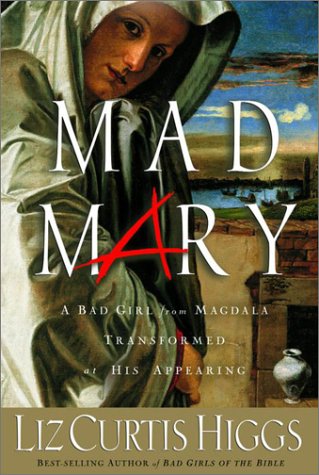 MAD MARY: A Bad Girl from Magdala Transformed at His Appearing

Higgs fans have wondered why Mary Magdalene, an obvious choice as a bad girl of the first order, didn't appear in Higgs's popular and . She warrants an entire book to herself, says Higgs—one reason being that Mary Magdalene turns out not to have been a bad girl at all, but one who has gotten "two thousand years of bad press." Higgs offers painstaking biblical exegesis to demonstrate how Mary Magdalene has been "myth-understood." For example, Higgs shows that there's no biblical evidence that Mary was a prostitute, and claims that she was probably old enough to be Jesus' mother. (She was most likely older, since when she is listed with Mary the mother of Jesus, Mary Magdalene's name appears first in almost every instance.) She was a woman of independent means, supporting Jesus' ministry with her financial generosity. She was not the woman who anointed Jesus' feet with oil (that was yet another Mary, Mary of Bethany). Finally, and most importantly, she was the person Jesus appeared to first after his Resurrection and entrusted with the news of his appearing. Although biblical scholars have long rejected the idea of Mary Magdalene as a scarlet harlot, few books have offered these ideas to the hoi polloi; Higgs, with her conversational style and characteristic humor, is the perfect author to popularize such scholarship. While Jesus no doubt redeemed Mary Magdalene's soul, Higgs has nobly rehabilitated her reputation.