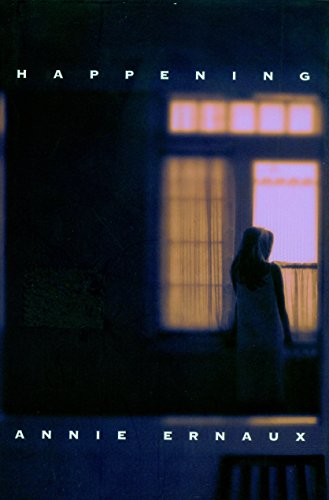 French novelist and memoirist Ernaux (; ; etc.) was 23 in 1963 when she discovered she needed an abortion. After an unsuccessful attempt with a knitting needle, she tracked down a backstreet abortionist in Paris. Her three-month-old embryo was finally expelled some days later in the bathroom of her student dorm, the bloody remains flushed down the toilet. Ernaux tells the story of those awful months very simply, with only occasional asides of hindsight. A few well-chosen details—"If I Had a Hammer" on the jukebox, the Singing Nun's "Dominique," the sexually predatory Movement men—anchor her story in the early '60s, although most of the emotional texture (the body denial, panic, that feeling that "my ass had caught up with me") is disturbingly timeless. Ernaux's preoccupation with "power" over her "text" makes her postmodernism plain, although there's also a wonderfully old-fashioned Frenchness in her world view. Stretched out on the abortionist's table, she sees the scene before her like a still life: Formica table with enamel basis, probe, hairbrush. Ernaux needed to write this history: the making of a written record is the only reason she can find for this otherwise accidental pregnancy and its bloody aftermath. Indeed, readers who lived through the Bad Old Days before abortion was legalized will meet a lot of old demons here, even if a younger generation may find it bafflingly understated. Though not destined for a wide readership, it is an important, resonant work.