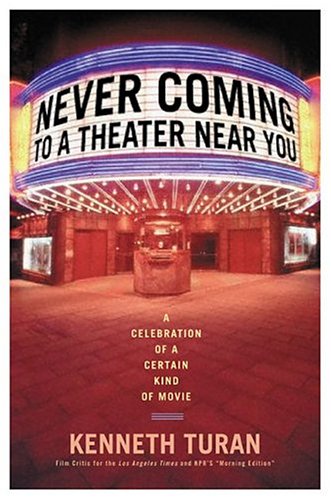 NEVER COMING TO A THEATER NEAR YOU: A Celebration of a Certain Kind of Movie

The title of this book, a collection of Turan's daily newspaper reviews from the , promises the unearthing of deeply obscure material or a truly revolutionary take on old favorites. Turan, who is also a contributor to NPR's , sets the book up more modestly in his introduction as a guide to unsung films now on DVD and video. He's a lovely reviewer, able to encapsulate a film's charms in a few phrases, and he has a particular knack for opening sentences, an important tool for any newspaper writer. But the section on English-language films contains reviews of movies like , and —i.e., multiple Oscar nominees and winners, many that benefited from mass-market publicity campaigns. In essence, Turan's favorite flicks are already sung. His section on foreign films is far more useful, since many of them had very limited releases. Turan saves the best for last: nine longer essays he calls "Retrospectives." These pieces treat topics we don't hear much about: the great directors Max Ophuls and Frank Borzage, the delectable treats that came from "pre-code" Hollywood, and Yiddish film. And Turan's funny gloss on the familiar conventions of Chinese martial arts films shows how perceptive and winning he can be.