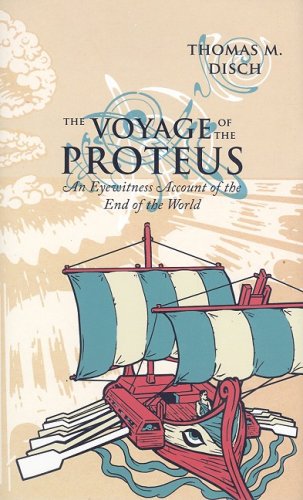 The Voyage of the Proteus: An Eyewitness Account of the End of the World

This offbeat and somewhat self-indulgent novella from Disch ( ) seeks to draw some parallels between the current Bush administration and the ancient Greeks (Agamemnon “was the George Bush of 1100 B.C.”), but his political message is lost in a muddled plot. A fictional version of the author travels back in time to the post–Trojan War era and becomes a passenger on the boat . While cruising the Mediterranean, “Tom” encounters Cassandra, Homer and Socrates and solves a riddle familiar to anyone who knows the Oedipus story. Tom holds forth to Cassandra on the technological marvels of modern life and the crassness of commercialism, but the resulting satire is mild at best.