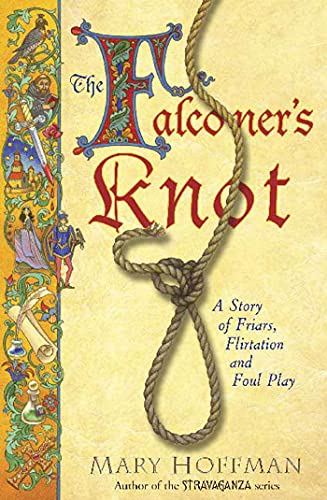 Falconer's Knot: A Story of Friars, Flirtation and Foul Play

Hoffman (the Stravaganza series) once again whisks readers off to Italy, this time in the 14th century, for this highly entertaining mystery-farce hybrid. Readers can pick up clues from the third-person narrative that alternates among the four main characters. Sixteen-year-old Silvano, a noble, is in love with flirtatious young Angelica, the wife of a wealthy middle-aged sheep farmer named Tommaso. When Tommaso is murdered, Silvano becomes the prime suspect (especially since his dagger was the murder weapon). Silvano, along with his falcon (hence the title), seeks refuge at Giardinetto, a Franciscan friary, where he works for Brother Anselmo, mixing pigments for the frescoes in nearby Assisi. Meanwhile, Angelica is secretly thrilled her odious husband is dead; she gains control of her husband's profitable business and keeps an eye out for a socially well-positioned husband. Isabella, wife of 20 years to the cold, wealthy merchant Ubaldo, fantasizes about her first love, Domenico. Chiara, despite being sent by her brother to live in the abbey at Giardinetto (next door to the friary), dreams of falling in love and raising a family. After several murders occur at the friary, including that of a visiting Ubaldo, Silvano, Brother Anselmo (who turns out to be Domenico) and Chiara uncover the identity of the murderer. As the solution surfaces, so do the true loves of the main characters. Even though many readers will guess where the plot is headed, the pleasure is in the journey. Ages 12-up.