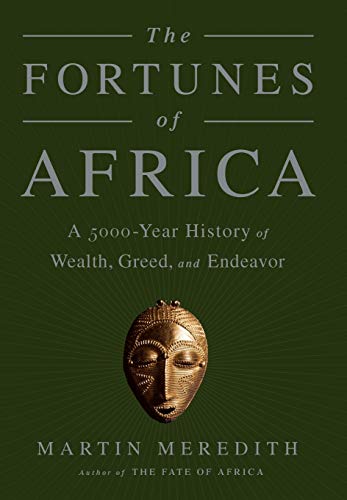 The Fortunes of Africa: A 5,000-Year History of Wealth, Greed, and Endeavor

In a mammoth tome that’s as comprehensive as a single volume on an entire continent can be, Meredith (The State of Africa) looks at Africa through the lens of its native wealth. He begins, appropriately enough, with the statement that “ever since the era of the pharaohs, Africa has been coveted for its riches.” Working his way forward from that premise, he concentrates on one geographic area after another, up to the present day. Mansa Musa, the 14th-century emperor of Mali and the richest man the world has ever seen, and King Leopold II of Belgium, “owner” of the Congo and one of the world’s most despicable despots, make their requisite appearances alongside scores of other rulers, explorers, and generals. Meredith places the Atlantic slave trade in the context of the slave trades with other markets, including the enslavement of Europeans in North Africa. Gold, ivory, diamonds, and oil also receive their due as sources of wealth and conflict. Colonialism’s arc is traced, as are the disappointments, setbacks, and outright horrors of the postcolonial era. The completist will note absences, but this is the new standard against which future histories will be considered. Maps & 16-page photo insert. [em]Agent: Felicity Bryan, Felicity Bryan Assoc. Ltd. (U.K.). (Oct.) [/em]
close
Details