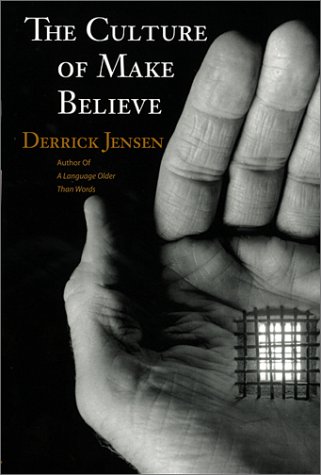 THE CULTURE OF MAKE BELIEVE

Writing with the same driven passion and intense intelligence as his critically acclaimed , which examined the interconnections between personal and social violence, Jensen says this book "is more about racism—and far more broadly hate as it manifests itself in our Western world." As in the earlier work, Jensen paints on a huge canvas—he details American racism from the genocidal slave trade through lynchings to the 2000 murder of Amadou Diallo by NYC police, and covers a wide range of other cultural horrors as well: the massacres of Native American people, the Holocaust, the 8,000 deaths from the 1984 Union Carbide gas leak in India, and the deaths of 500,000 children in Iraq. The book is packed full of startling details—South African apartheid laws were enacted at the direct request of the De Beers diamond company to facilitate business; aspects of Christian doctrine supported slavery until about 100 years ago. But the uniqueness and enormous power of Jensen's work is his ability to forge these events into an emotionally compelling and devastating critique of the intellectual, psychological, emotional and social structures of Western culture. Along with greed and globalization he says that the valuing of production over life and the abstract over the particular have set Western culture on a course that will end "really, with the end of the planet." While some readers might take umbrage at his more unsettling associations—he compares Hitler's political language to Teddy Roosevelt's—Jensen's intricate weaving together of history, philosophy, environmentalism, economics, literature and psychology has produced a powerful argument that demands attention in the tradition of such important books as Herbert Marcuse's and Brigid Brophy's