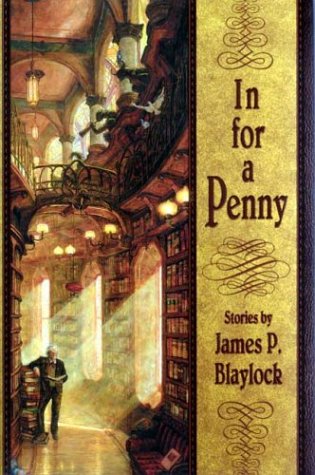 IN FOR A PENNY

Simply, almost artlessly written, the six fantasy stories in this slim collection from Blaylock (), set in the gentle, loving territory of his personal California world, verge on the sentimental but never slip into the banal. In the brief "Home Before Dark," the tale's hero gets an unusual glimpse of heaven. In the nostalgic "His Own Back Yard," Alan revisits his old childhood home ("The abandoned house was boarded up, its chimney fallen, the white paint on the clapboards weathered to the color of an old ghost") and has the satisfaction of meeting a vision of his young father and discussing the past. "Small Houses" is a poignant reverie on age and shared love in which Johnson builds his own burial casket, to his wife's dismay. "The War of the Worlds" focuses on some suburbanites who believe that a flying saucer has landed in their midst, but the real war is the unexpressed one between husband and wife. In the humorous "The Other Side," the premonition-prone protagonist winds up in a support group for the paranormally inclined. In the title story, a tale with a moral and the best of the lot, George Mason buys a worn purse at a garage sale with a penny he finds in the purse, with unexpected consequences. The dignified, understated jacket art of an old man in a library nicely suggests the mood of the stories.