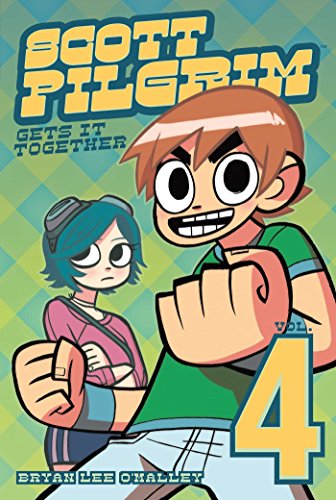 Scott Pilgrim Gets It Together

After three volumes of hilarious slacking—a jobless trek of playing in a band, wobbling between romantic entanglements and battling the seven evil ex-boyfriends of his current girlfriend, Ramona Flowers—Scott Pilgrim must finally make choices. Does he truly love mysterious messenger Ramona? Will his band SexBobOmb play out? Can he pay the rent? Can he keep a job? And why is be being followed by two ninjas? O’Malley’s manga-tinged youth comedy has gotten more confident as the series has become a veritable institution, with an eight-page color section to open this volume, but the story, too, reveals new layers of character. This time out the main complication in Scott’s life is Julie, a high school might-have-been-girlfriend. Cute Julie keeps showering him with attention, forcing him to deal with his feelings for Ramona, who also has a visitor from her past. The references from indie band lore, video games and manga keep the story sharp, while the occasional fight scenes—Scott must face two opponents at once!—are perfect metaphors for the uncertainty and excitement of being an early 20-something. O’Malley’s sparkling dialogue captures the bravado, insensitivity and engaging cluelessness of a generation for whom a dishwashing job constitutes “getting it together” big time.