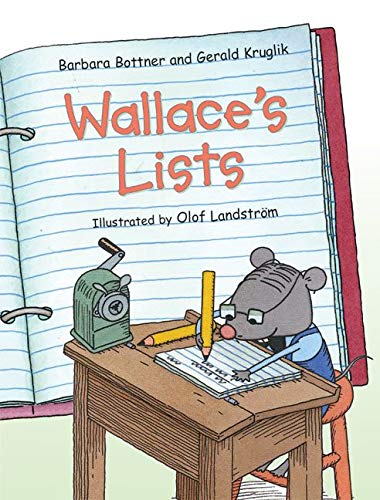 Three reasons to read coauthors Bottner and Kruglik's ) new tale: 1. The two unlikely mouse heroes—the cautious, list-making Wallace and his light-hearted companion Albert—develop a friendship in which Wallace's shortcomings turn out to be assets. 2. The book might dare readers to discover something new about themselves, too. 3. The plot inspires Landström's (the Boo and Baa series) tongue-in-cheek artwork, which provides lots of witty entertainment. Wallace, a bespectacled mouse in shorts and a bowtie, wants to say hello to his new neighbor, but he can't—it's not on his list of things to do that day. (Readers are treated to many of Wallace's lists, written neatly on lined paper.) Albert wears an old undershirt, sports long hair and never hesitates to revise his plans: "Changing my mind is an adventure," he tells Wallace, who listens, appalled but rapt. Eventually Albert's rash adventure-seeking casts Wallace in the reluctant but gratifying role of hero. He remains steadfast in crises, it turns out, and comforts Albert when his wacky plans go awry. Taking a leaf from classic '30s cartoons, Landström furnishes interiors with many small but solid-looking items, visual tokens of Wallace's need for familiarity. His hilarious spreads make liberal use of crosshatching and gestural lines: cats are drenched with water; lightning strikes; luggage carousels send Wallace flying. Bottner and Kruglik don't insist on a magic transformation from Wallace—he just has to learn to bend a little. This one goes on the recommended list. Ages 4-7.