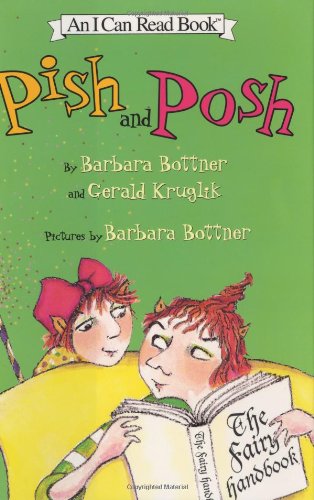 This whimsical I Can Read Book by husband-and-wife collaborators ( ) opens with a bang—literally: "After dinner, there was a loud outside the front door." Racing to the doorstep, a delighted Posh discovers a copy of while her more sensible, skeptical best friend and housemate Pish firmly declares, "We are not becoming fairies." Posh obviously has other ideas, as she scans the tome in a futile attempt to discover a fairy's method for doing dishes quickly. She fails to read the instructions closely, however, and when a wand appears at the door, she waves it with cheerful abandon, causing "mountains of suds" to escape from the sink. The youngster's subsequent (mis)use of the handbook to retrieve her friend Izzy's missing dog brings similarly outlandish results, as Posh inadvertently conjures up a troll, mermaid and giant—but no pooch. The much taller, sophisticatedly dressed Pish presents quite a contrast to Posh, who sports a yellow polka-dotted frock and an oversize hair bow, but the two do share several characteristics—brilliant red tresses out of which poke elfin ears, providing an extra dollop of fun. Bottner's buoyant pictures feature comical facial expressions, adding the right tone to this breezy portrait of an opposites-attract friendship. Ages 4-8.