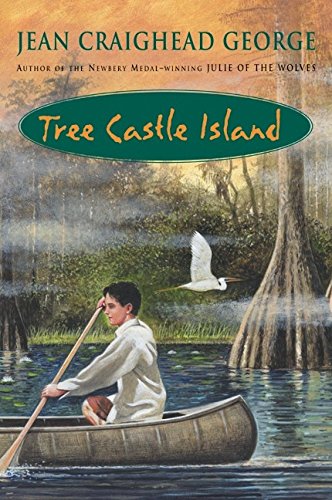 Combining survival tale, nature study, mystery and legend, Newbery Medalist George () serves up an ultimately unsatisfying stew. While his parents vacation in Europe, 13-year-old Jack, the narrator, stays on his Uncle Hamp's farm on the St. Mary's River in Georgia. Hamp goes off to help a neighbor for "at least a week or two... maybe more," and Jack decides the time is ripe to paddle his homemade canoe to the source of St. Mary's, the great Okefenokee Swamp, and search for the fabled Paradise Island. That "Paradise," Jack muses, "is a fantasy for most people [but] Uncle Hamp says it's part of a human quest for discovery." When an alligator tears a hole in Jack's canoe, the boy finds himself stranded on a small island, where he becomes acquainted with the wildlife and vegetation, builds himself shelter and forages for food. While George demonstrates her expertise as a naturalist, she relaxes the pacing to such an extent that almost no tension remains in the narrative. Jack, underdeveloped as a character, approaches his adventure with matter-of-fact calm. A puzzle emerges when Jack finds an Airedale that looks just like his own dog, answers to the same name turns out to belong to another boy, an explorer like Jack, who is revealed to be Jack's identical twin, separated at birth. The factual descriptions of the swamp habitat and the fantastic elements of the plot cancel each other out, collapsing the quasi-mythic underpinnings of this "quest for discovery." Final artwork, by George, not seen by . Ages 8-12.