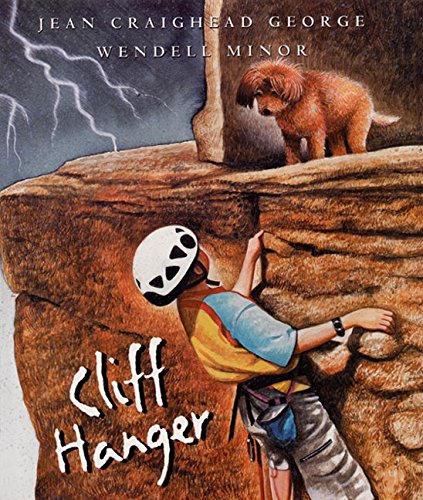 George offers an up-close, nail-bitingly dramatic look at the sport of rock-climbing in this picture book adventure, but her unlikely plot scuttles the outing. Young Axel's dog, Grits, is stranded on a mountain ledge as a thunderstorm approaches. Under the supervision of his father, the leader of the climbing school, Axel braves the elements to rescue his pet. George has the lingo down pat, and infuses the tale with tension—but therein lies the problem. Dag, Axel's father, calls a halt to the climb, but Axel goes ahead anyway ("Dag had no choice," George ventures rather limply. "His son was climbing"). Axel reaches the dog just in time ("Crackling electricity lifted the hair straight up on Axel's head and arms.... Sparks snapped from his ears to the rocks"), but he faces even graver danger on his descent ("No nut, carabiner, or rope was there to save him if he made a mistake"). It's hard to imagine any adult allowing a child to risk his life in this manner, no matter how beloved the pet, and, in a picture book, this behavior seems implausible at best. Minor serves up a series of realistic action shots that capture the athleticism of the sport but are not always believable—most notably, the picture showing the crackling electricity presents the boy and dog as relaxed and smiling even as the sparks fly. Ages 4-7.