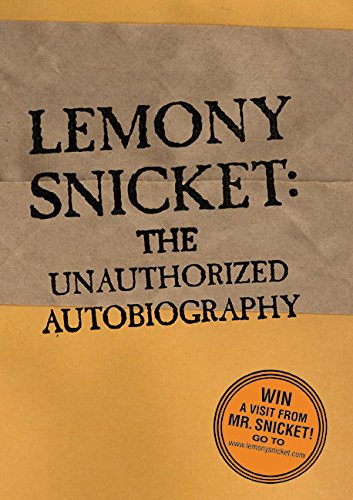 A certain maniacal glee went into the creation of this archly humorous volume. Beginning with the suggestion on the front flap of the dust jacket to disguise its "dangerous" contents ("Make use of this book's reversible jacket immediately"), readers will know they're in possession of something deliciously left of normal. The jacket reverses to display a hilarious parody of Snicket's A Series of Unfortunate Events covers, entitled and featuring "The Luckiest Kids in the World!" by Loney M. Setnick. Meanwhile, the contents lead readers on a merry goose chase. The 13 (naturally) chapters burst with red herrings, non sequiturs, mysterious letters, diary entries and so on—not to mention fading black-and-white photographs with captions such as "Total strangers" and "W?H?O?" The narrative makes for a most satisfying tease, larded with such Snicketisms as "For various reasons, portions of this chapter have been changed or made up entirely, including this sentence." It would seem that Snicket's obituary from the highly unreliable (which is reproduced in the book) is premature, and that there will indeed be more installments about the Baudelaires, though nothing is certain in the end and readers are left nearly as in the dark about Snicket as they were at the start. Of course, this is all part of the fun, guaranteed to make the author's fans itch to get their hands on a copy of this devious romp masquerading as an autobiography. Ages 10-up.