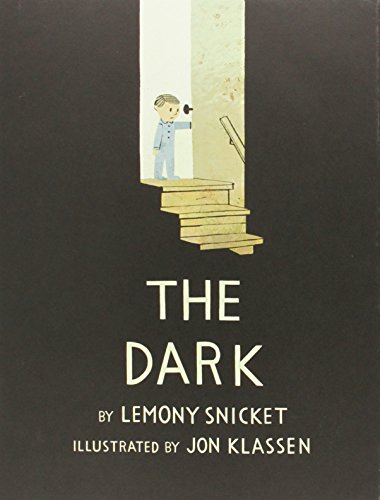 Snicket and Klassen are an inspired pairing in this suspenseful take on childhood fear. Laszlo, a solemn boy in blue pajamas, is scared of the dark, and it's easy to see why. He lives in a house with "a creaky roof, smooth, cold windows, and several sets of stairs." The floors are bare, the halls are empty, and the windows are uncurtained. And the dark in his house is not just any dark—it has a will of its own. "Sometimes the dark hid in the closet. Sometimes it sat behind the shower curtain," writes Snicket (13 Words). Klassen (This Is Not My Hat) constructs his spreads with quiet finesse, playing expanses of shadow and darkness off small, constricted areas of light, as the boy roams through the house. Still, Laszlo's fear does not translate into a look of terror; his dot eyes and straight-line mouth signal calm. Sometimes, he even talks to the dark ("Hi, dark," he says down the basement stairs). One fateful night, though, the dark talks back, surrounding Laszlo as he lies in bed. Only the boy's face and hand, clutching his trusty flashlight, can be seen. The rest of the page is a sea of black. "Laszlo," the dark says, "I want to show you something." In the deliciously tense sequence that follows, the dark beckons Laszlo into the basement, pointing him toward a closed dresser drawer. Laszlo's flashlight illuminates only a small wedge of the basement stairwell; beyond his beam of light, the black closes in. The darkness is not just a condition, readers understand; it's an actual entity, palpable and breathing. At the moment Laszlo steps closest to the dresser, Snicket intervenes with a diabolically timed soliloquy on the philosophical need for creaky roofs, cold windows, and darkness, delivered at exactly the moment the fear of these things looms largest. "Without a closet, you would have nowhere to put your shoes," he points out, as readers wait with bated breath to find out what lurks inside the dresser, "and without the dark, everything would be light." In a final twist—and a moment of uncharacteristic gentleness from Snicket—the dark offers Laszlo a drawerful of light bulbs that are just the right size for his nightlight. "The dark kept on living with Laszlo, but it never bothered him again," Snicket concludes. While it might not combat fear of the dark, it's an ingenius introduction to horror movie-style catharsis, and a memorable ride on the emotional roller coaster that great storytelling creates. Ages 3 – 6. Author's agent: Charlotte Sheedy Literary Agency. Illustrator's agent: Steven Malk, Writers House. (Apr.)
close
Details