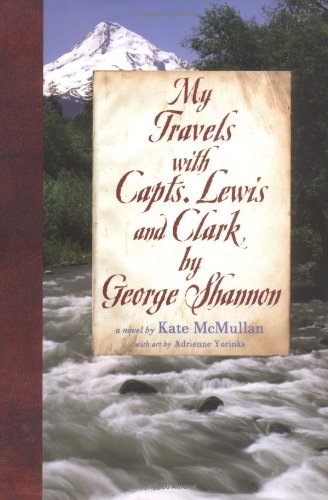 MY TRAVELS WITH CAPTS. LEWIS AND CLARK BY GEORGE SHANNON

"Capt. Lewis noticed I already kept a journal.... I wrote in it faithfully so that Ma and the others back home might one day read of my adventure." Narrator George is just 16 years old when he becomes Private Shannon, 1st U.S. Regiment, Infantry, in the famous expedition to find a Northwest Passage to the Pacific, a presumed river route across the continent. Based on scant records of McMullan's ( ) own ancestor, George's fascinating story unspools through convincing journal entries between July 1803 and November 1805. Readers become privy to the challenges faced by the Captains as they tried to keep spirits up and the 40-man crew together as they become beleaguered by disease, hunger, cold, heat, bugs, boils and the strenuous labor of portaging boats. McMullan litters the narrative with delectable period details, and leavens with humor the expedition's seriousness of purpose ("Last night... the chorus of snores would have drowned out a thunderstorm"). Surprising facts (such as Capt. Lewis was only 29 years old at the start of the journey) juxtaposed with retellings of classic moments (e.g., Sacagawea's role in the success of the journey) keep the story lively, as does the suspense as to when the captains will realize there is no connection between the Missouri and Columbia Rivers. At the beginning of the book, Captain Lewis asks George to record a "true and honest" story; indeed, readers will find George to be a credible and engaging witness to this inspiring journey. Ages 10-up.