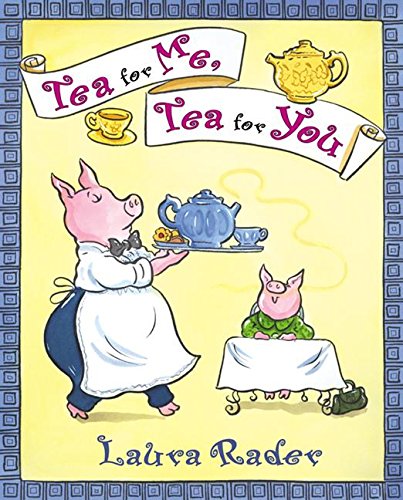 TEA FOR ME, TEA FOR YOU

Rader's (; ) rhyming counting book unfolds through a series of speech bubbles above her porcine characters' heads. "One for tea?" asks the supercilious waiter of Swinings Tea Room. "Yes, just me," says a small pig in a green dress with matching handbag, until she spies a friend coming through the door and announces there will be another ("No, wait a minute— for tea!"), and then another. The beleaguered waiter becomes more and more exasperated until the 10 assembled friends order everything on the menu, which brings a smile as he jots down the order. Each character wears distinctive clothing, one in a top hat and gray pinstriped suit, another with red cateye glasses. Rader's line and watercolor drawings capture facial expressions and body movement especially well. The goofy joie de vivre of the cavorting pigs and the snooty jowls of the waiter enliven each spread. The waiter and his assistants roll in carts of food, but the patrons refuse to eat until the waiter joins them ("We can't have tea... without... you!!!"). While the counting concept grows somewhat muddied by the inclusion of several other uncounted waiters and waitresses, youngsters will enjoy the sign at the end of the book that announces. "You might think this is the end, but here comes another [pig] around the bend." Ages 4-8.