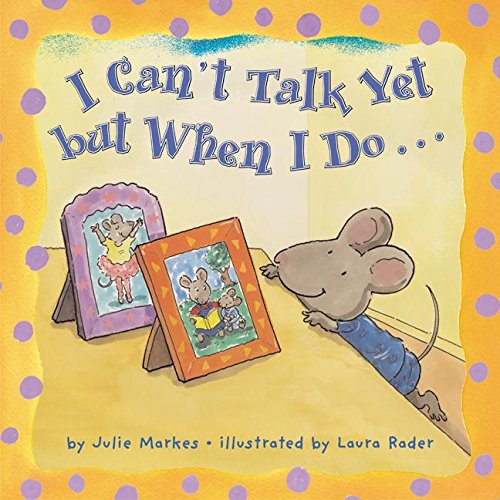 Although many youngsters will fervently assert that being the sibling of a baby is a thankless job, Markes () and Rader () comically and effectively counsel patience with this extended thank-you note from a pre-verbal, anthropomorphized baby mouse to his older sister. "I can't talk yet, but when I do,/ I'll say thank you for helping to take care of me" accompanies an illustration of the baby happily flinging the goo his sister attempts to feed him. The youngster even promises to acknowledge (albeit with some qualification) that his mischievousness may be less than adorable, as when he's caught blithely munching on a picture of a princess while his sister sobs in her mother's arms ("I'll tell you that it was an accident when I tore/ the painting you brought home from school"). The team's keen yet understated gift for domestic humor keeps the conceit from becoming cloying; at the same time, they subtly underscore the competence, achievements and vital role of the older child (in one vignette, the sister stars in the school play, in another she shoos the baby away from an electrical outlet). Smart and sympathetic, this tale offers a strong note of encouragement to new older siblings. Ages 3-up.