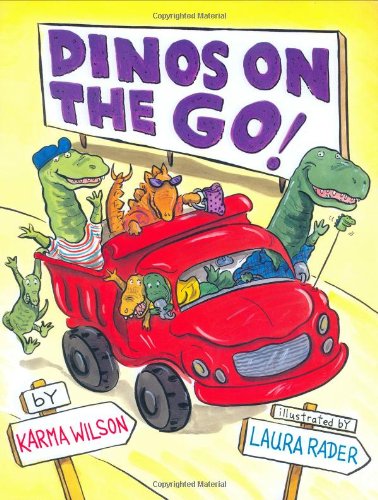 DINOS ON THE GO!

Dinosaurs take to the sea, sky and streets in this rhyming, cross-continental trip. As they mobilize and close in on an undisclosed location, Wilson's ( , reviewed Sept. 27) rhyming verses track their every mile: "Stegosaurus sails her ship/ across the seven seas./ She's rushing through the rolling waves./ There's really quite a breeze." Rader contributes acrylics outlined in sweeping flourishes of black ink. The human populace regards the migrating dinos with mixed reactions—some with smiles and waves, others (such as the unfortunate folks sharing a train's sleeper car with a T. Rex family) with terrified expressions. Rader also delights in several verbal and visual jokes: she pictures an aqua Barosaurus on a tiny pink and purple bicycle and gives punny names to signs and shops such as "Allo's Fossil Fuel Dino-Mighty Gas 'n' Grub." However, in what would appear to be a winning synergy for fans of dinosaur and transportation books, the often unimaginative, sing-song rhymes ("Dinos, dinos, on the go/ Why are they on the run?/ They're on their way to meet and play and have some dino-fun!") keep the book from reaching its potential. Ages 3-6.