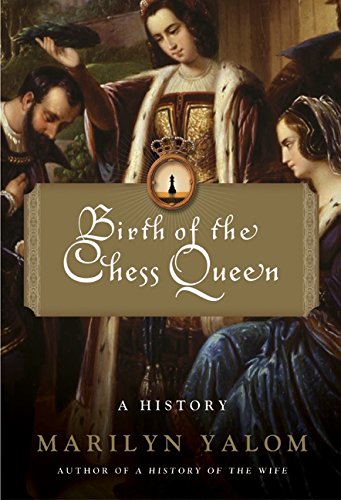 BIRTH OF THE CHESS QUEEN: A History

A senior scholar at Stanford's Institute for Women and Gender who has written extensively on women's history, Yalom ( ; etc.) sees the rise of female power throughout the centuries reflected in the history of the chess queen: "She has entered the academy of gendered icons, alongside the Earth Mother, the Amazon, and the Virgin Mary." For 500 years, chess was played in India, Persia and the Arab world minus a queen; she finally made her entrance in southern Europe around A.D. 1000. Drawing parallels between "symbolic queens on the chessboard and living queens at numerous royal courts," Yalom introduces readers to significant queens, empresses and countesses as she traces the spread of chess across Europe. With anecdotes, art, legends and literature, she shows how the chess queen became "the quintessential metaphor for female power in the Western world." Yalom offers an outstanding glimpse at chess as a courting ritual: "The chess queen and the cult of love grew up together and formed a symbiotic relationship, each feeding on the other." She also addresses the current status of female chess players—only 5% of the world's chess players are women—and wonders if "the best female players [will] ever be able to beat the best male players." Combining exhaustive research with a deep knowledge of women's history, Yalom presents an entertaining and enlightening survey that offers a new perspective on an ancient game. B&w illus.