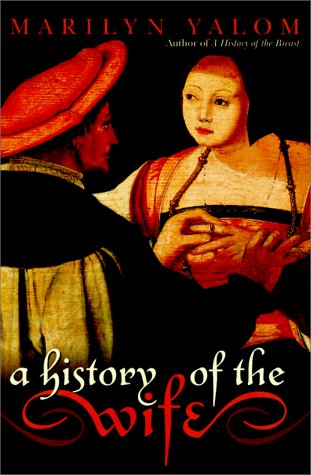 History of the Wife

The voices of ordinary women speak volumes in this sweeping history of women and marriage in the Western world. As with her well-received A History of the Breast, Yalom, a scholar at Stanford's Institute for Women and Gender, moves easily among several fields--feminist history, religion and myth, anthropology, personal narratives, literature, pop culture and sociology--to trace the changing role of wives from ancient times to the present. The general direction of change--from subordinate toward more egalitarian roles--comes as no surprise. What may be unexpected, however, is Yalom's evidence that, while generally conforming to cultural norms, individual marriages throughout history have been more complex than law and tradition may have dictated. Barren wives were sometimes favored over fertile ones, arranged marriages sometimes encompassed deep love and wives' personal ""power"" could vary considerably. Nevertheless, marriages were hardly egalitarian, even after late-18th-century political ideals proclaimed women to be ""co-creators of... new republican societies"" in America and Europe. Wives had little legal autonomy; they could not control their own money or even have access to their children in the event of separation or divorce, until equal rights began to be won during the 20th century. Yalom discusses the push for birth control rights, the impact of the depression and World War II and today's two-spouse-income economy and 50% divorce rate. She excels in presenting personal perspectives, including those of working-class wives, immigrants, African-Americans and lesbians. Yet she is less successful in examining wider societal effects, including the impact of high divorce rates. ""To be a wife today when there are few prescriptions or proscriptions is truly a creative endeavor,"" she concludes; true enough, but it's an insufficient explanation for how egalitarian marriages might actually work. (Feb.) Forecast: Stunning cover art, a topical subject and the title's echo of Yalom's previous book should attract many readers in addition to this book's obvious audience of women's studies majors. If Oprah did history, this might be her kind of book.
close
Details