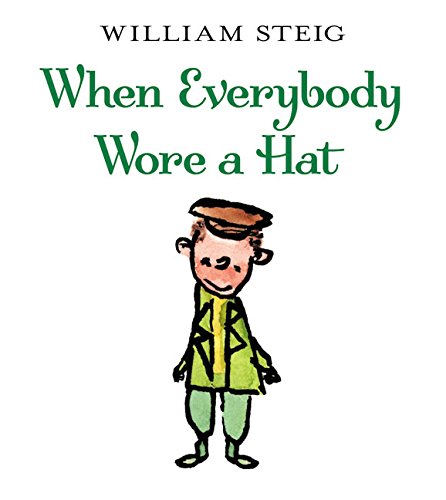 WHEN EVERYBODY WORE A HAT

With his customary mix of charm and directness, Steig () reflects on his Bronx childhood. For the most part, the author pictures events in his trademark ink-line and watercolor images, but readers will be struck by the opening photo of a boy in short pants, climbing a tree: "In 1916, when I was eight years old, there were almost no electric lights, cars or telephones—and definitely no TV." Steig remembers his immigrant parents arguing in "German, Polish, Yiddish and English.... Who knows what they were saying? But we learned the important words." In a discomfiting image, two of the four Steig children cower in the foreground while their parents yell back and forth. Later, in more tranquil times, the whole family goes rowing, and "Pop" enjoys a cigar while listening to Caruso on the Victrola. Steig writes in short statements that give the impression of memories sparking to mind. He juxtaposes distant conflict with immediate danger: "There was a big war going on over in Europe. It was World War I./ Prince was the janitor's dog. Kids were scared of him." Throughout, his cramped, crabbed and emotive cartoons—as gruff as his voice—indicate the styles and street life of the early 20th century. Indeed, everyone from the burly moving guy to "Mom's best friend" (a wide-eyed lady in a showy dress) wears a chapeau outdoors: "There was no such thing as a hatless human being." The engrossing book closes with a current photo and no syrupy aftertaste; as usual, Steig writes and draws concisely. His autobiography extends the unspoken mantra communicated in all of his books: less is more. He leaves it to readers to bring their own experience to bear in what he leaves unspoken (or undrawn) between the lines. All ages.