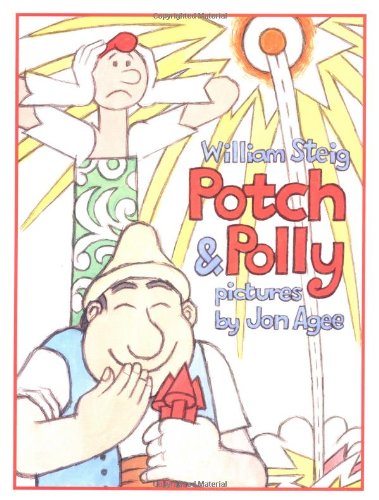 Antisentimentalist Steig (; ) crafts a screwball Cinderella story about a couple of klutzes. Potch was born laughing, with "an angel with a clown's face hovering over the bed." He grows from a chubby, happy boy into a chubby, happy, bald man—not quite princely material. One day, costumed as Harlequin at a masquerade ball, he spies "the preternatural Polly Pumpernickel," a lanky socialite with a little head, big feet and plenty of charisma. "He was so smitten, he did a double backflip." (The illustrations leave this nimble move to the imagination.) Polly takes to Potch, too, but when his over-exuberant dancing lands her in the fountain, she gets steamed. The book tallies Potch's slapstick efforts to win her back, each resulting in an accident of vaudevillian proportions. In aptly loony images, Agee () alludes to Krazy Kat's affection for the brick-toting Ignatz Mouse. He recalls classic comics with strong directional lines, sweeping curves, voice balloons and sound effects ("wok!... clonk!" after Polly flings a dictionary). As in other wacky courtships—Popeye and Olive come to mind—the romance is hard to fathom, but the puckish storytelling and artful compositions have considerable spark. Ages 4-8.