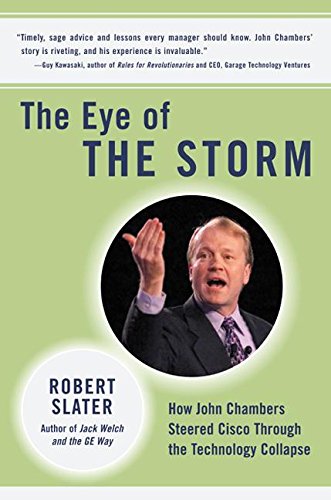 THE EYE OF THE STORM: How John Chambers Steered Cisco Through an Unexpectedly Quick Recovery

Slater, a biographer of Jack Welch and George Soros, here profiles John Chambers, the leader of Cisco Systems, one of the Internet economy's greatest success stories. The author traces Chambers's rise from a dyslexic West Virginia childhood to the head of what became, at its $500 billion peak, the most highly valuated company in the United States. While a trajectory like that could make one helluva business tycoon biography, Cisco's sharp decline during the recent recession—which occurred just as Slater finished his first draft—made Chambers's success a thing of the past and forced Slater to completely rethink the book. And though the author believes he "had a better story to tell as a result of Cisco's setback and the early stages of its recovery," he never quite integrates the two halves of the tale. Slater provides plenty of detail on the firm's rise, including its strategy of acquiring other technology firms, but fills the sketchy outline of the events that constitute the alleged "recovery" with generalities. Slater also repeats phrases, like a magazine headline asking if Chambers is "the best CEO on earth," and his quotes from sources are repetitive and too long. It's easy to understand why Slater wouldn't want to let so much research go to waste, but perhaps he could have gained some perspective on what happened to Cisco and to the economy at large by holding off a while longer.