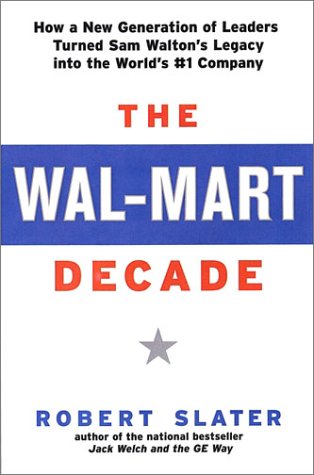 THE WAL-MART DECADE: How a New Generation of Leaders Turned Sam Walton's Legacy into the World's #1 Company

Since Sam Walton's death in 1992, Wal-Mart has grown into one of the world's largest and most controversial companies. Slater's latest (after ) delivers an insider's look at the retailer's meteoric rise. Wal-Mart's secret to success is well-known: by selling products for less, the firm makes less profit per product, but is able to sell more products and keep inventories low. This strategy brought the company incredible success before Walton's death, but Wal-Mart had yet to hit its real growth spurt. It was doing $43.8 billion in sales in 1992. Just three years later, under CEO David Glass, sales hit $100 billion. Glass "took Wal-Mart out of Middle America and made it into a global brand," explains Slater. He shows how Glass and his colleagues stayed true to Walton's idiosyncratic management style while investing in the technologies and logistics operations that a multibillion-dollar company needs. Slater saves some of the most compelling chapters for the book's end, when he describes how the firm is besieged by legions of bankrupt small-business owners, muckraking journalists and, of course, lawyers. Slater reports Wal-Mart is the most sued entity in the U.S. "I don't know how things happened," says Glass, "but you suddenly become a target rather than everybody's favorite." Thanks to his access to top executives, Slater shows how Wal-Mart survived (by beefing up its PR department) and thrived (grabbing the top spot on the 2002 Fortune 500 list).

Jack Welch and the GE Way