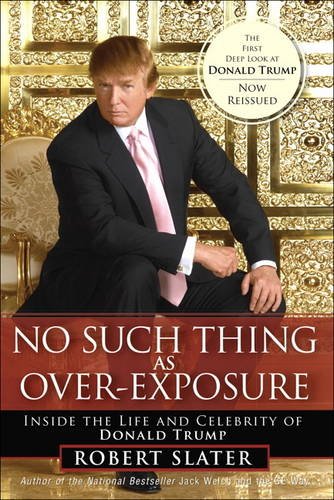 NO SUCH THING AS OVER-EXPOSURE: Inside the Life and Celebrity of Donald Trump

"The Donald" has been the subject of countless articles and monographs; what separates this book from the competition is Slater's level of access (over 100 hours of tape of the man himself), his doggedness (over 150 interviews with peers and others) and his experience—Slater has authored numerous business bios and profiles, from to . His approach to New York real estate's major mogul is a paradoxical warts-and-all hagiography, where Trump's flaws seem to play as much of a role in his success as his business acumen. Foul-mouthed asides are printed verbatim, and Trump is relatively forthcoming on his already much combed-over personal life (as he is in his own books like ). What Slater does best is dramatize the tension of high-stakes business deals, and there's plenty of that, from Trump's purchase and revamping of 1 Columbus Circle to the contract negotiations for . Timed to be released with the third season of that hit TV series, this book's 100,000 first printing is a bet on the continuing appeal of this gruff, larger-than-life embodiment of venture capital—just another one of the many lessons on how Trump uses the media to increase the value of his properties and extend his name across his realm.