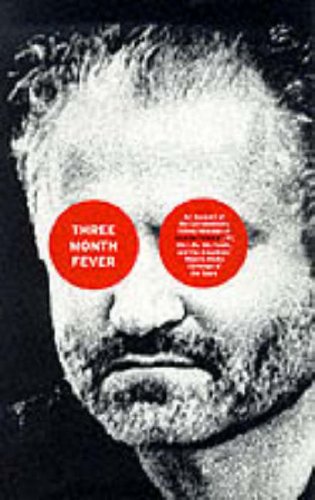 In the years since the 1987 publication of Scar Tissue, his collection of razor-sharp fictional commentaries on contemporary culture, Indiana (Resentment, etc.) has proven himself one of the most astute chroniclers of U.S. mores, media and celebrity, a skilled reporter and journalist whose idiosyncratic, intensely personal writing style enhances rather than detracts from his subjects. In Three Month Fever, he re-creates serial killer Andrew Cunanan's life, including his childhood in a middle-class Filipino family, his participation in gay social scenes and his need and ability to constantly reinvent his persona, as well as his murder of Gianni Versace and subsequent suicide. Not a traditional ""facts only"" report, a true-crime narrative or a ""nonfiction novel,"" the work is what Indiana calls a ""pastiche"" of these genres, combining investigative reporting and fictional techniques held together by personal commentary. Indiana often relies upon wholesale invention: ""I do not know if Cunanan [did these things]. But I feel that he did, or at the very least something analogous happened... but I have chosen what I consider the most plausible scenarios."" Such rampant fabrication may remove Three Month Fever from the realm of strict nonfiction, but makes for electrifying reading. Indiana's re-creation of Cunanan's crimes and ever-shifting states of mind are convincing, but his real story, and strength, is his analysis of the hysterical, wildly inaccurate media coverage of the case. In the end, Cunanan's life and crimes, both factual and reimagined, become Indiana's vehicle to explore and expose how the media create a self-referential and self-perpetuating culture of hysteria, stereotypes, inaccuracies and glorified violence. Although such ideas may seem obvious to media critics, Indiana's writing, at turns dazzling and infuriatingly self-involved, makes them intensely visceral. Agent, Emma Sweeney of Harold Ober Associates. First serial to Out; foreign rights sold in Holland. (Apr.)
close
Details