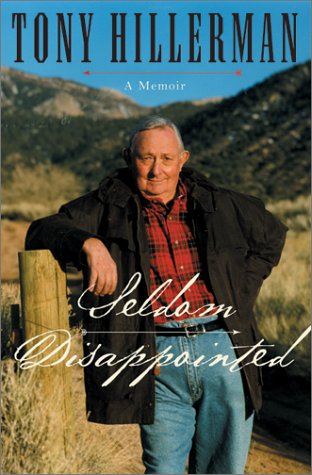 "Don't look for a way to make money; find a way to make a living doing what you like to do anyway. Otherwise you're just raising ransom to buy your life back," said Barney Hillerman to his younger brother Tony, now in his 70s, a beloved mystery and nonfiction author (; etc.). But Hillerman's nurturers were many, starting with his fearless mother, who as a teenager at the turn of the century established an Oklahoma homestead by herself. Even as death claimed her husband and WWII took Barney's life, Lucy Hillerman insisted that her youngest son follow his heart into soldiering. The author shares his humble beginnings in Potawatomie County, Okla., his parents' backgrounds and their strong Catholic faith, before devoting eight of 30 chapters to his military stint, which ended when he was 20. After recovering from a major injury, Hillerman, by a "fortuitous typo," was left off the homeward-bound list and thus set "on a collision course with two Navajo marines... and with the Enemy Way ceremonial their family was holding.... That put me in contact with the people I would love to write about." He details military people and places that he incorporated into his Navajo mysteries; a particularly predatory fellow from his training days, for example, became the bad guy in . His wife, Marie, shuns personal attention, focusing instead on her husband and his work. They both take joy in their biological and adopted children. Hillerman is best with the many characteristically vivid descriptions of people, places and events. He deftly details his work and personal life, yet the man himself remains largely a mystery. Fans, however, will never be disappointed by this utterly delightful memoir. 16 pages b & w photos not seen by .