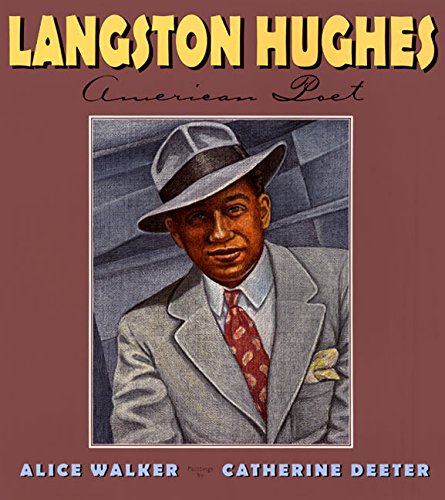 Deeter (who also collaborated with the author on and ) contributes imposing artwork to Walker's first book for children, originally published in 1974. Impressively meshing realism and symbolism, the period-detailed paintings make creative use of light and texture as they portray the poet at various ages, in a spectrum of settings. Walker's rather wandering, informal narrative explains that Hughes, born in 1902, spent much of his childhood living with his grandmother in Kansas, while his mother moved around in search of work and his bitter, bigoted father settled in Mexico, where he became a wealthy rancher. A lonely child, Hughes "began to love books more than he loved most people." As the author traces the determined Hughes's path to realizing his dream of becoming a poet, her conversational tone recalls that of an oral storyteller; after explaining how he encountered racial discrimination when applying for jobs, she writes: "Some people, when they have a hard time, stay mad, with their lips poked out. But not Langston. When he felt bad, he sat down and wrote poems until he felt better." In a new author's note, Walker describes her personal connection to Hughes, affirming the affection that shines through this warm portrait. Ages 7-11.