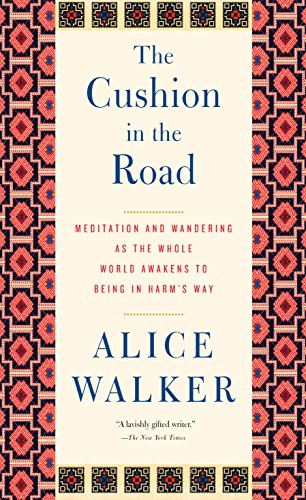 The Cushion in the Road: Meditation and Wandering as the Whole World Awakens to Being in Harm’s Way

In linking meditation to wandering, the distinguished and prolific Walker, whose books include the Pulitzer Prize– and National Book Award–winning The Color Purple, produces a meandering assortment of her ideas and musings between 2008 and 2012 about matters spiritual, political, and personal. Figuring in her diverse and self-absorbed ruminations are, among others, Obama, Hilary Clinton, Dennis Banks, Cicely Tyson, Mumia Abu-Jamal, Julian Assange, Bradley Manning, and John Lennon. The mélange includes her reflections on her favorite films and audiobooks, her officiating at a gay marriage, her own “marriage”—to her cat and dog, her imagining Frida Kahlo and Diego Rivera’s response to the drug cartels, along with her public letters to, among others, Aung San Suu Kyi and Nawal El Saadawi. She notes that her “mentor[s] and teacher[s]” include the Dalai Lama and Amma, Gandhi and Martin Luther King, Castro and Mandela. The section “On Palestine”—where Walker recounts her journey to Gaza with Code Pink, her participation in the Freedom Flotilla, and argues for a “one-state settlement”—will likely attract the most attention. Walker’s concern for the state of humanity and the planet comes through as impassioned and genuine, as does her view of the place of meditation in her personal life. Agent: Wendy Weil, the Wendy Weil Agency. (Apr.)
close
Details