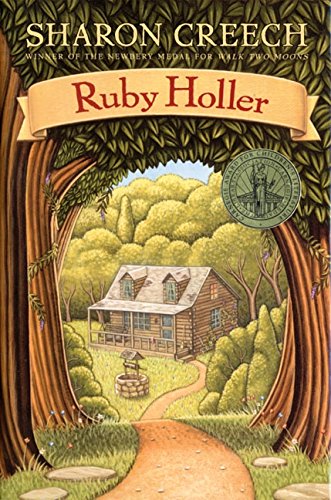 The characters introduced here—two abandoned children, their villainous guardians and a kindly country couple—might have stepped out of a Dickens novel, but as Creech () probes beneath their facades, the characters grow more complex than classic archetypes. Florida and her brother Dallas, raised in an orphanage run by the cold-hearted Trepids, rely on each other rather than grownups for support. They become suspicious when Mr. Trepid informs them that they are going to a place called Ruby Holler to accompany old Mr. and Mrs. Morey on separate vacations. Florida is to be Mr. Tiller Morey's companion on a canoe trip; Dallas is to help Mrs. Sairy Morey hunt down an elusive bird. Readying for the trips proves to be a journey in itself as the Moreys, Florida and Dallas make discoveries about one another as well as themselves in a soothing rural environment. This poignant story evokes a feeling as welcoming as fresh-baked bread. The slow evolution of the siblings—who are no angels—parallels the gradual building of mutual trust for the Moreys. The novel celebrates the healing effects of love and compassion. Although conflicts emerge, readers will have little doubt that all will end well for the children and the grandparently Moreys. Ages 8-12.