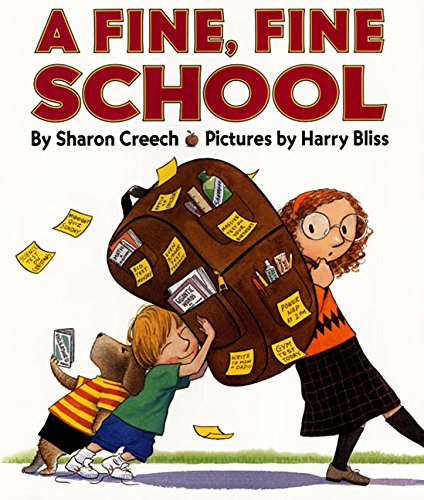 Given current battles over standardized testing and summer sessions, this timely story about extended schooling touches a nerve with a kindly delivery. The tale centers on Mr. Keene, a good-intentioned but zealous principal, and Tillie, a studious girl who spends free time teaching her little brother to skip and climb trees. When strolling the school hallways, Mr. Keene beams, "Aren't these fine students? Aren't these fine teachers? Isn't this a fine, fine school?" He so adores education that he schedules classes for weekends, then holidays, then summers, too. Tillie's low-key home life is transformed. She checks her watch and lugs a giant briefcase off to class, despite her lonely brother's imploring looks. Meanwhile, Mr. Keene exclaims, "How much we will learn!" He doesn't notice the gasps and grimaces of his stressed-out students and teachers. Creech () styles the principal as proud of his scholars and staff, but shows how his drastic measures diminish quality of life. cartoonist Bliss, in an impressive debut, foregrounds the core drama between Tillie and the principal, yet also develops secondary characters among Tillie's overwhelmed classmates (toting books called and ) and her precocious dog, Beans (calmly enjoying the "Arts and Leisure" section); comic thought balloons, clever book titles and expressive faces contribute to the tale's success. In the end, Tillie politely convinces Mr. Keene that he has been unreasonable. With quiet intensity, Creech and Bliss persuasively argue one side of a volatile issue. Ages 4-8.