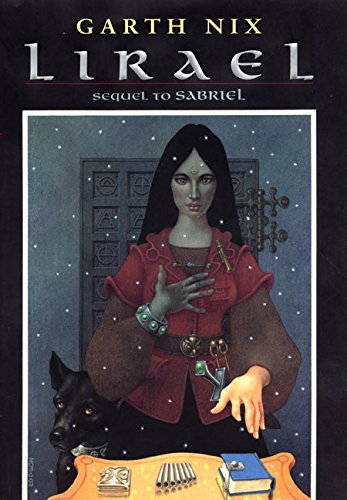 Lirael: Daughter of the Clayr

In Nix's sequel to Sabriel, readers return to the entrancing and complicated Old Kingdom: a world of necromancy, seers, dangerous monsters and talking animals (the cat Mogget is back). The relationships between the Kingdom's various realms and the magic may take some unraveling for readers new to the series, but the heroine's plight will be instantly compelling. Lirael is the only one of a community of clairvoyant women not to be gifted with ""the Sight,"" and the mystery of her parentage contributes to her alienation. Just after her 14th birthday, Lirael releases a Stilken (half-woman, half-crustacean) from a glass-covered coffin. Her act leads to a meeting with a healer (Lirael's great-great-grandmother) who fortifies her and urges her to take as her only friend the impertinent ""Disreputable Dog,"" a creature of suspicious magical origin whose true nature remains unknown. The overall plot may follow the expected course an evil magician threatens the well-being of the Old Kingdom and Lirael finds her destiny linked with that of handsome, nervous Prince Sameth (son of Sabriel) but startling subplots abound and keep the pages turning. The book ends on a cliffhanger, and Nix leaves nearly every major question unanswered. The evil is still at large, the Disreputable Dog still unexplained and Lirael's mother's desertion of her unresolved. Readers hoping for a satisfying ending will have to wait for the third in the series, to be titled Abhorsen, and tentatively scheduled for fall 2002. Ages 12-up. (Apr.)
close
Details