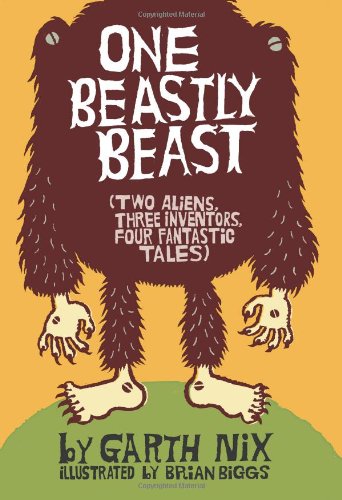 Successfully training his sights on a middle-grade audience, the acclaimed Nix (the Abhorsen trilogy) presents a quartet of wacky yarns set in fantasy-laced worlds and topped off with plenty of wordplay. In the first, Peter is on his way to return DVDs to the rental store when four rats dressed as pirates steal them. (“We be video pirates, and those there discs will fetch us a pretty sum.”) A crew of Navy rats escorts the boy down the sewer to “the Neverworld,” where he helps defeat the bread-wielding pirate Blackbread. The second caper stars a bored princess, daughter of a former “full-time warrior maiden” and a wizard, whose quest for adventure brings her inside a “magical clockwork monster” that she erroneously expects is planning to attack her kingdom. A third tale introduces a boy living in an orphanage who finally finds his parents after escaping adoption by pirates and the reach of a pair of “hideously squidgy, lumpy, slimy, sweaty, yellow-tentacled, bulbous-eyed aliens,” and the final story centers on one of 17 sisters who helps her town face a sea serpent that is damaging boats, capturing girls and turning them into “penguinmaids.” Biggs (the Shredderman series) renders even the most monstrous creatures as ludicrous rather than gruesome in his lighthearted cartoons, laid out here with wit and a good eye for visual rhythm. Ages 7-11.