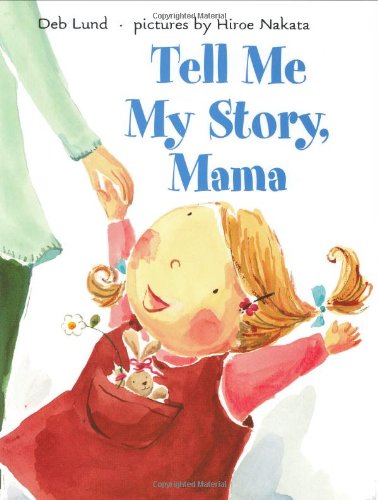 TELL ME MY STORY, MAMA

In Lund's ( ) sweet and sensitive imminent-sibling tale, a preschooler asks her very pregnant mother for "the story about when I was inside you." Nakata ( ), like the insightful mother she portrays, keeps Mama's condition a secret from readers until the final pages, allowing them (again, like Mama) to focus on the girl's story. Mama, an expert raconteur, uses vivid and often comic detail to give depth to her unadorned language. "I bumped into people because I forgot how large I was. And Daddy pushed me up hills when we went for walks." The girl eagerly participates in shaping the narrative. Her attentive face appears in miniature at the bottom right corner of the flashback spreads; she asks questions ("How did you get to be so big?") and adds elements she relishes from previous tellings ("And I was mad!" she gleefully recounts of her noisy delivery-room debut). Nakata fills the diagonal space between Mama's and the girl's comments with pastel watercolors that seem as light as air. Yet every scene percolates with the excitement of parental anticipation and a knowing, warmhearted sense of humor (Daddy's first-time-father anxieties—often manifested in his inability to keep his glasses on—make for an effective running joke). The story ends on a simply articulated but enormously reassuring note: "The new baby will have its own story," Mama tells her daughter. "You'll still have yours." The shelf of new baby books may be crowded, but it's well worth making room for this graceful, gently funny entry. Ages 3-5.