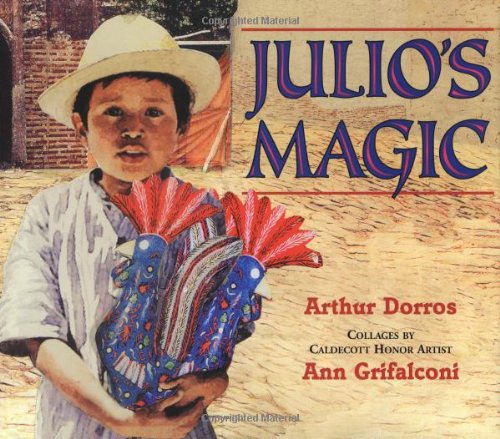 The son of Mexican farmers, Julio wants to be a woodcarver, like his aging friend Iluminado ("the best carver in the village"). Heading off to meet Iluminado one day, Julio thinks about the upcoming wood-carving contest "in the city far away," a contest with a generous prize, in which Iluminado has never participated ("My contest is with myself," he says, "to make the best carvings I can"). Yet Julio encourages him, worried that his friend looks thin, and his burro is hungry. The two head up the mountain where the copal trees' branches whisper what shape they should take. "Ideas for carvings all around," Iluminado says, spying grasshoppers and hummingbirds and a branch that "will make a good dragon." Grifalconi's (the Everett Anderson books) mixed-media collages echo the idea that art can be found everywhere. A wooden rooster and a real donkey flank a woodcarving neighbor; folk art hangs on Julio's bedroom wall while dry gourds hang like balloons from the ceiling. Spot art of the finished carvings appear alongside the text—from angels with broad wings to electric-hued animals with wild patterns. Text and illustrations work together to produce a lively portrait of Julio's world—from the satellite dish atop a one-story school (that brings "lessons from outer space") to the field work that keeps food on the table. This story takes art out of the museum and shows its creation as an organic part of daily life. Ages 4-9.