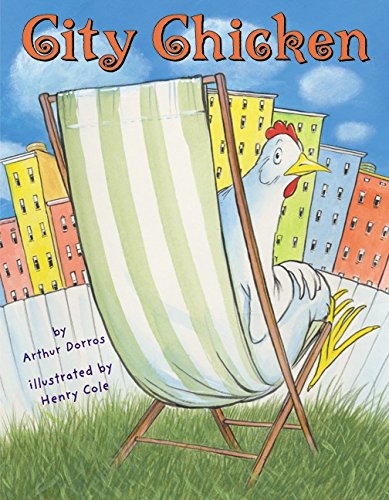 One-liners and sight gags are as thick as feathers in a henhouse in Dorros's () and Cole's () pert poultry drama. Henry ("short for Henrietta") is the city chicken of the title; she lives in a cozy coop in her owner's backyard. Lucy the cat tells her so much about the wondrous animals who live in the country ("They are huge and brown, and let people jump on their backs," she says, describing a horse, while Henry visualizes a Godzilla-size chicken racing through the city streets with seven enthusiastic riders sprawled between her wings) that Henry decides to go and see them for herself. After she makes her way out to rural farmland ("Here's a truck that goes to the country," an ant tells her, gesturing toward a garbage truck. "And they serve great meals on board!"), an encounter with an industrial barn crammed with crated egg-laying hens convinces Henry that the city is where she belongs. " 'Was the country all it was cracked up to be?' asked Lucy. 'It was different,' said Henry. 'But it was not the place for me.' " While disparate themes compete for readers' attention—mechanized agriculture, knowing where one belongs, finding out that not everything lives up to its billing—the dynamic spreads and storytelling relay the action with boisterous energy and humor. Ages 4-8.