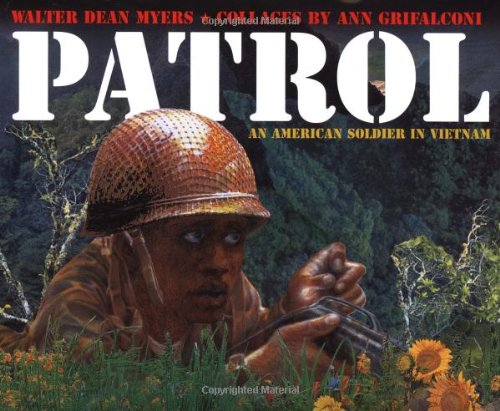 PATROL: An American Soldier in Vietnam

Camouflage endpapers set the stage for Myers's (, reviewed below) unusual and gripping picture book set in Vietnam and geared to older readers. "The land of my enemy/ has wide valleys,/ mountains that stretch/ along the far horizon,/ rushing brown rivers,/ and thick green forests," the riveting narrative poem begins. Grifalconi's (the Everett Anderson books) sophisticated mixed-media collage shows a breathtaking vista, lush with trees, jagged mountains and terraced hillsides. On the next spread, Myers drops readers into the jungle with the narrator, a young American soldier, and his squad of nine men. The protagonist makes a nerve-wracking trek ("Somewhere in the forest, hidden in the shadows, is the enemy"), witnesses a bombing raid ("My body shakes./ I tell myself that I will not die on this bright day") and comes face-to-face with an enemy soldier ("In a heartbeat, we have learned too much about each other"—neither fires). Myers, who fought in Vietnam, lays bare the young man's emotions. Short phrases combine power with grace as the author artfully conveys the outward events of warfare and the resulting inner turmoil: in the village, the young man sees "the enemy./ A brown woman with rivers of age etched deeply into her face./ An old man, his eyes heavy with memory." Grifalconi, too, subtly highlights war's absurd contradictions. One particularly striking scene finds the G.I. facing his enemy across a field alight with heartbreakingly lovely flowers and wildlife. Readers will hope this is as close as they ever get to the real thing. Ages 8-12.