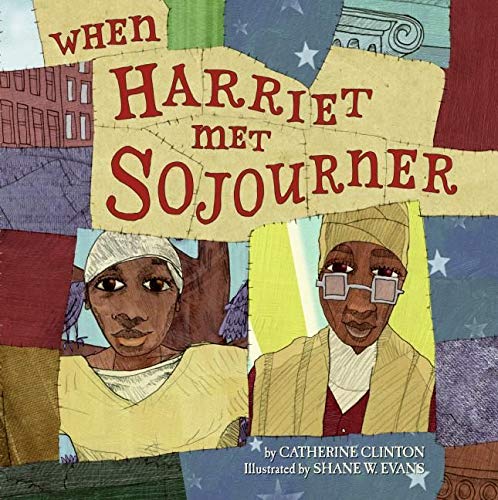 Although the title raises different expectations, Clinton and Evans (previously paired for ) deliver gripping parallel portraits of Harriet Tubman and Sojourner Truth, two remarkable women born into slavery whose paths cross here only on the final pages, in a meeting about which the author can do no more than speculate. Alternating between the two subjects, Clinton underscores their courage, perseverance and passion as each obtains her individual freedom and then campaigns against slavery. A personal tone and specific facts bring home the experience of slavery for the target audience without diluting too much of the horror but also without introducing concepts beyond their grasp: “Araminta's [Harriet Tubman's] parents loved and cherished their sons and daughters but could not protect them.... Two of her sisters were snatched away, stolen off and sold South—they were gone but never forgotten.” As Harriet Tubman sews a quilt, Clinton notes, “like the quilt she worked on, one square at a time, she pieced together her plans for running off to the North.” Evans builds on this motif, re-creating the appearance of stitches alongside his mixed-media compositions so that they look basted onto the background, itself resembling a collection of light-colored quilt squares and quilt tops. Some illustrations incorporate fabric scraps, subtly reinforcing the ideas that each woman assembled her own future, and that history can be made from the meeting, or joining together, of influential and inspiring people. Ages 5-7.