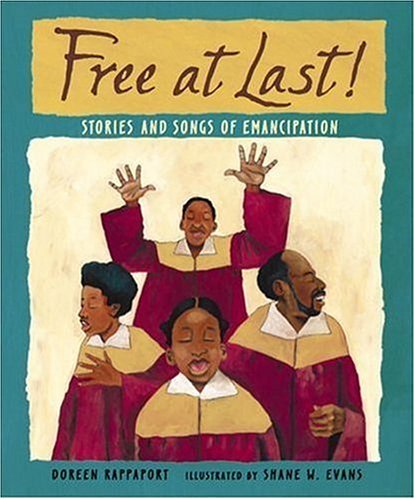 FREE AT LAST! Stories and Songs of Emancipation

The creators of here chronicle the African-American experience from the Emancipation Proclamation of 1863 to the 1954 Supreme Court decision outlawing school segregation. Rappaport labels this era "one of the most shameful periods in American history" and proceeds to demonstrate the ways in which the promise of Emancipation failed to deliver. The author includes among reports of widespread discrimination, vigilante campaigns (such as Ku Klux Klan members' "night rides"), and legislation that was intended to protect blacks but frequently failed to do so, as well as the occasional bright spots in the arduous struggle for equality. Curiously, given the emotional intensity of the many tragic events of the period, the historical account seems at times dry or vague (e.g., "After Germany invaded Poland in 1939, hundreds of thousands of white men were hired to build weapons for our allies. Black leaders insisted that some of these jobs go to their people. Nothing was done"). Because of the episodic presentation, the ideas are not as integrated as in (reviewed below). The volume is most involving when utilizing primary sources, such as poetry, songs and brief anecdotal stories about such influential individuals as Ida B. Wells, Jackie Robinson and Thurgood Marshall. Evans, on the other hand, creates a strong visual counterpart, with portraits of famous individuals every bit as strong as dramatic scenes—from a haunting image of a lynching (only the victim's feet show) and joyful paintings of theater and dance. Ages 9-12.