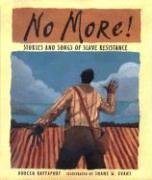 NO MORE!: Stories and Songs of Slave Resistance

Weaving together first-person accounts by familiar historical figures, traditional black spirituals and vignettes featuring fictional composites of actual people, Rappaport () creates an affecting, multitextured chronicle of slavery in America. Throughout, the author underscores the courage, resilience and resolve of those held captive. Writing in the present tense, Rappaport brings an immediacy to such events as the failed attempt by a group of Africans to revolt against their captors during the Middle Passage; Frederick Douglass's bold defiance of his vicious master, a "nigger-breaker"; and the daring work of John Scobell, a runaway slave who became a Union spy during the Civil War. Interspersed with anecdotes of specific historical incidents are passages affording glimpses of the captives' daily lives, as in descriptions of "hush harbors," spots deep in the woods where they met clandestinely to worship; and the secret schools at which black children learned to read and write. The symbolic and realistic converge effectively in Evans's () often emotion-charged oil paintings, which capture both the pain and the triumph at the heart of this trenchant compilation. Ages 9-12.