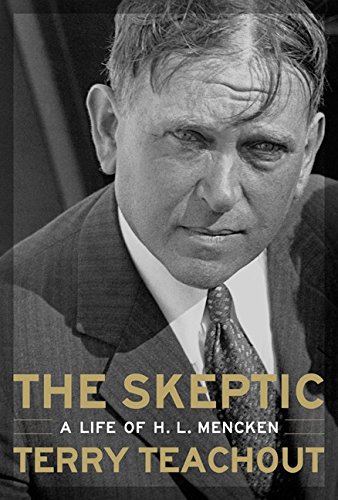 THE SKEPTIC: A Life of H.L. Mencken

There is no lack of material on the curmudgeonly early-20th century journalist, and a devotee could spend years wading through Mencken's three-volume autobiography, two early biographies, and essays in the scholarly journal . However, Teachout simplifies the process for the casual reader, distilling the weight of information on Mencken into a tidy, fascinating biography that has much of the neat phrasing and sly wit that the rancorous writer displayed himself. Organized chronologically, the book follows the fat baby (Mencken noted that if cannibalism hadn't been abolished in his home state of Maryland, he'd have "butchered beautifully"), the teenage cub reporter, the editor and finally the memoirist. By drawing on published works and recently discovered private papers, Teachout puts the skeptic into context, giving as much insight into the Jazz Age as into the writer who hated jazz. Whether describing the quirks of novelist Theodore Dreiser, the rise of the pulp magazine, or the importance of the Scopes trial, the author brings deeper understanding to Mencken's passionate diatribes, and shows that the journalist was not just a product of his times, but a shaper of its attitudes. Although Teachout, a music critic for , obviously has an avid fascination for and admiration of the man who was determined to take on "braggarts and mountebanks, quacks and swindlers, fools and knaves," this is not a hagiography. He shows that Mencken could be both a fool and a knave, and even an occasional braggart. Yet he was always honest in his opinions, and Teachout's treatment of the material honors that journalistic impulse.