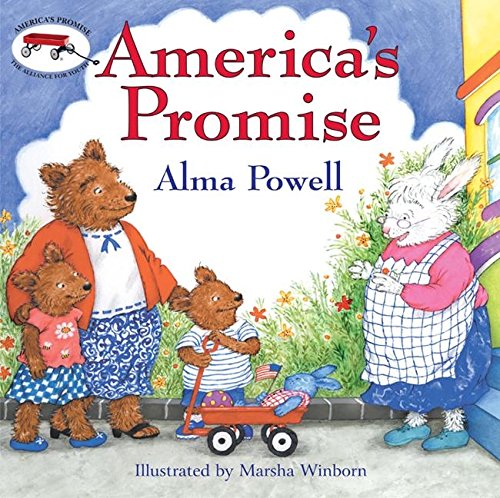 Part picture book, part promotional brochure, Powell introduces readers to America's Promise—the Alliance for Youth, the nonprofit organization that she co-chairs and that was founded in part by her husband, Secretary of State Colin Powell, "to challenge the nation to make our children a national priority." A mother bear and her two cubs quickly discover many of the positive and pro-active elements of their new neighborhood when Momma, who works, seeks out proper childcare. Before long, narrator Honey and Benji have joined the group of young animals at Mrs. Mayberry's Play and Learn House. With help from the mayor, the local grocer and other concerned citizens, Mrs. Mayberry and her charges soon embark on a clean-up project and transform an empty lot into a community park. Powell's text amounts to not so much a story as a string of scenarios that illustrate her organization's "five promises to young people"; these promises are emblazoned at relevant moments, right in the spreads (e.g., as Honey and Benji enter Mrs. Mayberry's: " All children deserve safe places to learn in and play"). Via cheery watercolors, Winborn's () enthusiastic, colorfully dressed animal cast adds some humorous asides and some mild spirit to this otherwise didactic outing. Ages 4-7.